That’s another great triathlon weekend done and dusted. What I love about the Subic Bay International Triathlon is how all the local tri teams come out and have a presence there, despite all the other newer triathlons springing up all over the country. SuBIT really is an institution — despite (especially?) its signature heat and humidity at this time of year. 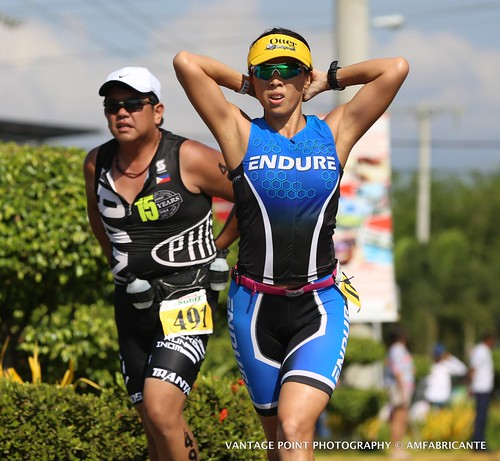 Before I go any further with my race report, here are the race results!

I got to Subic on Friday night after driving through terrible traffic, but my teammates were participating in the sprint the next day (all-female relay, and male solo) and I wanted to spend some time with them the night before and help them get set for the race. 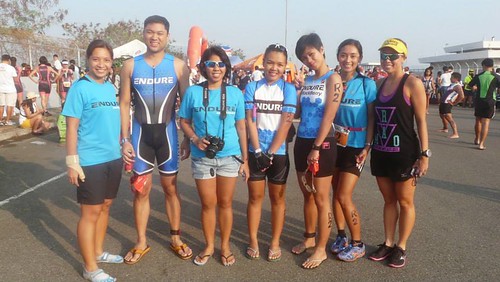 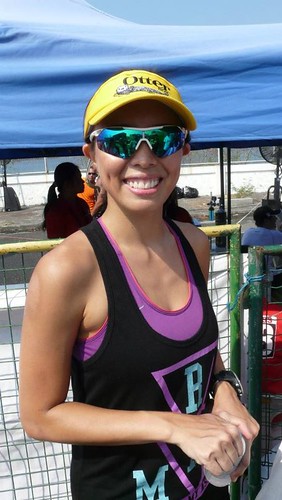 Like I said in my previous post, the sprint and minisprint races are good to watch because they are short and fast so you don’t have to wait around for hours to see someone cross the finish line, but at the same time they still require a lot of effort so to see the faces of each participant as they cross the finish line is quite inspiring.

Some of these participants took the sprint distance quite seriously. I witnessed a neck-and-neck finish sprint which ended as one of them tripped and rolled across the finish line. Wow!

The paratriathletes were amazing. From the visually impaired who had a guide with them from start to finish, to the amputees with blade prostheses to make running a more natural motion… But one of them, a Pinoy, had only one leg and the other one was amputated above the knee. He swam and biked single-leggedly, and then did the whole run leg on crutches. What heart!

While it was a fun morning, I didn’t realize how tiring it would be to stand by the sidelines and cheer. I felt the fatigue in my bones as I went to Travelers Hotel later that day to pick up my race kit. Would I be OK for the race the next day? We would see. 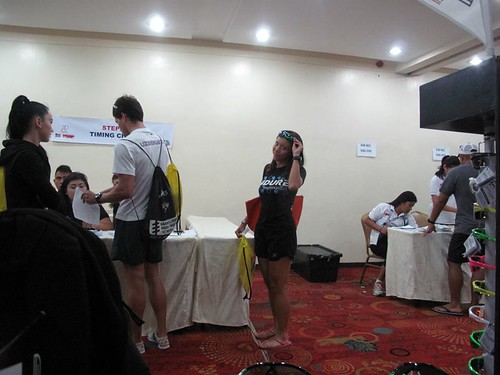 thanks Salice Eyewear Philippines for this photo

While the rest of my teammates who had come out for the sprint drove back to Manila, I attended the briefing and pasta dinner with two other teammates, Rico and Mikes, who like myself were doing the Olympic distance the next day. The food was actually quite good and we were glad to enjoy it in the comfort of the airconditioned Verona Hall at Travelers Hotel (last year’s pasta dinner at Harbor Point was difficult to digest in the warmth and humidity of the outdoor setting).

And so after a precious few hours of sleep, it was race morning. 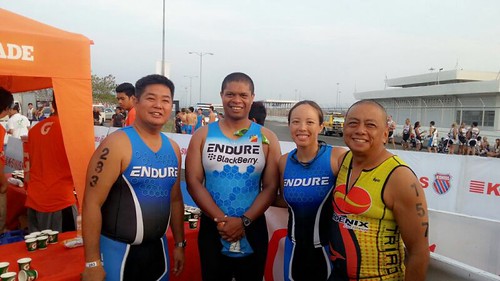 with Rico, Mikes, and Tito Bong (photo from Gerard Cinco) 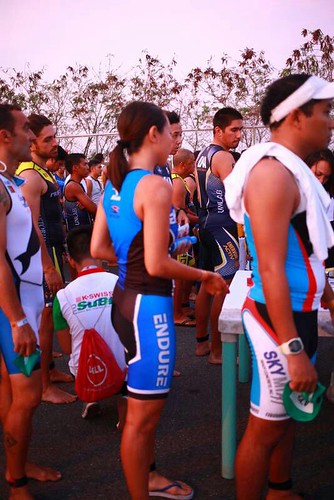 in line for body-marking (photo from Gerard Cinco)

Because we age groupers were sharing the same race course with the ITU elites, our gunstarts were later in the morning (the all-female start was at 6:45am). This meant by the time we got onto the run leg, the morning sun would be beating down at its strongest. But I resisted thinking ahead and took it one leg at a time, starting with the swim, admittedly still my weakest discipline. 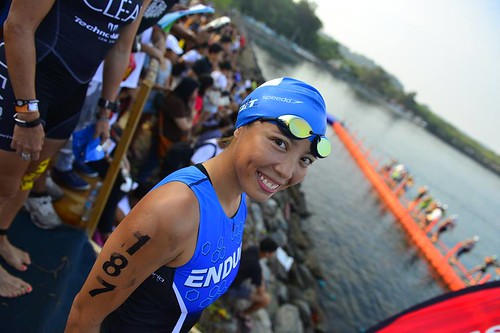 waiting for the start

It was a deep-water start, which meant we had to get into the water and tread while waiting for the last few minutes to our starting horn. I made a few critical errors here. 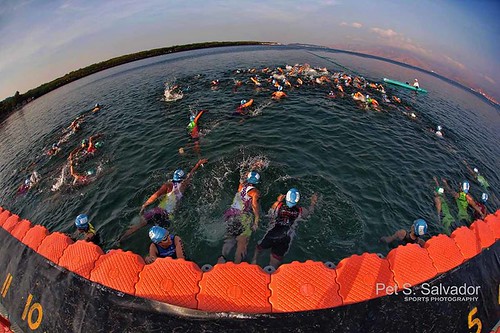 I’m somewhere in the front fray. (photo from Peth Salvador)

Error #1: I was caught with my legs hanging straight down in the water when the horn sounded. Instead of lying as flat on my stomach in the water as possible, sculling with my hands and kicking my legs, I hesitated behind the front line of women and was still treading water when they started swimming forward. This also made getting some momentum difficult.

Error #2: I stuck too close to the buoy line. I thought this would help because I wouldn’t need to sight, but the buoy line is a magnet for poor swimmers. Many of them sprinted and crossed my path to get to the buoys, only to slow down and block my way. I didn’t want to swim over them because I was scared of getting kicked in the face (their kicks were quite strong actually).

In retrospect, at the swim legs I’ve done well (5150, Cebu), I didn’t follow a buoy line but instead sighted and tried to swim as straight as I could to the turn buoy.

Anyway I was out of the water in a glacial 37 minutes. I had a nice fast transition though and was out on the bike in less than a minute.

I do a trainer session called “The Wolf”, so named because in the movie Pulp Fiction a character known as The Wolf is called in to fix things. I had a bad swim, so now I needed to fix that by having a strong bike leg. After spinning a few kilometers in the small ring I felt good enough to start pushing pedals in earnest and caught many of those who had exited the swim earlier. 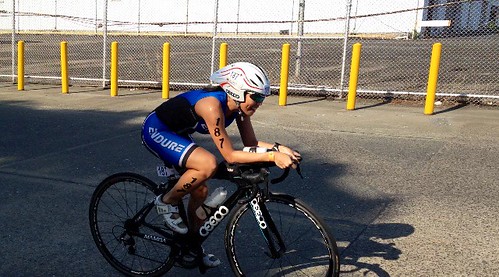 The new bike route was fast and relatively flat; although there were some long false flats and headwinds you could be fairly aggressive and still be confident you’d have a good run off the bike.

My major concern was staying out of the draft zones, so whenever I came up on someone riding slower than me, I was obliged to overtake. There were a few riders who would draft off me when I overtook them, which irked me and only made me go faster to drop them. This year it was much easier to do that because my new Ceepo, Mako, is much lighter than my old Loki. 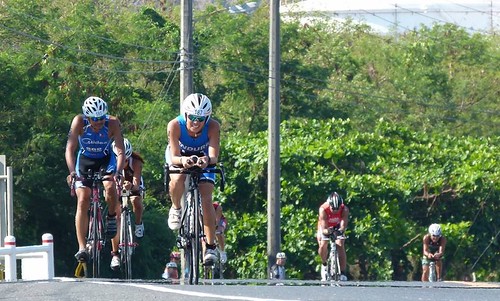 powering through the home stretch (photo from Andy Leuterio)

After four turnarounds it was time to head into T2. I racked Mako, ripped off my matching aero helmet, and pulled on my Mizuno Wave Sayonaras, which are the only shoes I’ll race in these days.

Every SuBIT I have been at has always been scorching hot due to its date on the calendar. Late April has some of the hottest temperatures, and this edition was no exception. 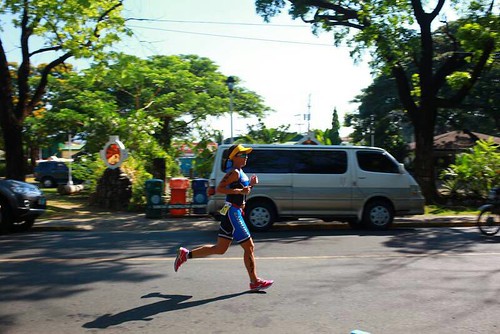 on the run (photo from Gerard Cinco)

Because the run leg is composed of three loops, you never really know if the person in front of you is ahead of you or behind you. The best you can do is overtake everyone in sight on each loop while still managing your energy and core temperature to get through the succeeding loops. I went for sponges any chance I could (which was once a loop) and doused myself with water at each of the three aid stations. 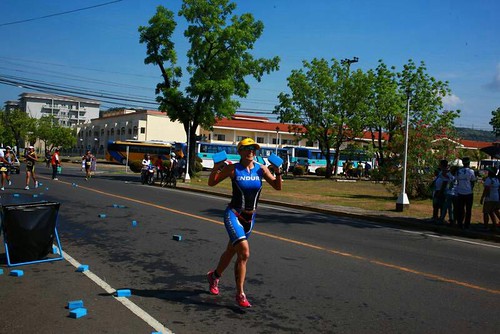 sponges are your best friend (photo from Gerard Cinco)

By the third loop I felt myself slow down significantly and could feel the beginnings of cramping. But unlike previous years where my cramping started in my quads, it was in my hamstrings and calves. I soldiered on and caught sight of one woman between me and the finish line. Should I chase her and end up in a sprint showdown like I’d seen in yesterday’s race? The thought of tripping over the finish line and the (mistaken) notion that she wasn’t in my age group led me to let her go.

I spent some time getting a post-race massage and attempting to immerse myself in the ice pools, so I was feeling pretty good. Then I went to check the results at the timing booth and found out less than 30 seconds had separated me and the woman I had let get away!

I had the best bike and run splits in my age group but started off on the back foot due to the bad swim. So it is true what a wise man once said: “You can’t win a race in the swim, but you can lose it.” 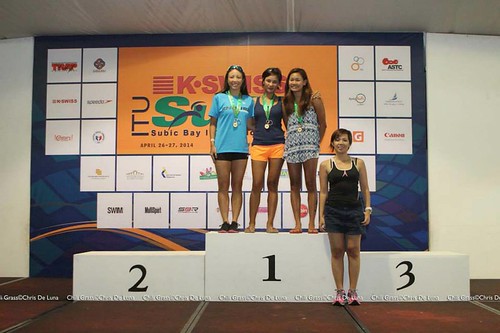 The two women I shared the podium with were sisters. I ended up the Gomez in a Brownlee-style sandwich (at the London Olympics in the men’s triathlon, Spaniard Javier Gomez took the silver medal between the brothers Alistair and Jonathan Brownlee from the UK). This is actually my best performance at an Olympic-distance tri: a new PR and two steps up on the podium from 4th, where I languished last year.

Now, to fix that swim…

I hope everyone enjoyed their SuBIT experience. This year’s highlight for me was that beautiful swim start. While age groupers had to do a floating start due to our numbers, the elites participated in the first ever pontoon dive swim start in the country. The finisher medals were also a great souvenir and reminder of another memorable race experience.