The Endure Blackberry-Aquathlon (EB-A) was for beginners transitioning into multisport. The EB-A also attracted experienced triathlon teams which made the event truly dynamic and exciting.

With weekend foot races routinely held every week in the metro, runners have begun looking for different ways to experience their favorite sport, especially as the heat of summer kicks in. What better way than through an aquathlon, a multisport event combining the disciplines of swimming and running?

ENDURE in partnership with Microwarehouse, the official Philippine distributor of BlackBerry smartphones, held the ENDURE-BlackBerry Aquathlon on March 12, 2011 to promote the multisport lifestyle.

Eighty-one (81) aquathletes splashed off to a refreshing start and sped their way through Batasan Hills’ steep inclines, stepping over the finish line to the cheers of family, teammates, and friends old and new. Kevin Lyndon Eijansantos of Team Tri Mac took first place in men’s Bold (30:17), while Hanna Miel Sanchez topped the women’s Bold field (37:30). For the Curve category, the men’s and women’s winners respectively were Jose de Vera of the UP Trantados (19:20), and Chloe Jane Ong (24:02). Jessica Salazar of the Laguna Mako Sharks topped the combined male-female field in the Style category (5:03). Winners received prizes from Adidas and Sassa Activewear, while all finishers took home goodie bags containing issues of Men’s Health, Women’s Health, and Runners’ World as well as Nature Valley bars and Milo 3-in-1 packs, a well-earned reward for enduring the distance.  words by Noelle 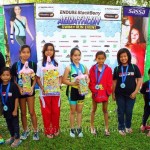 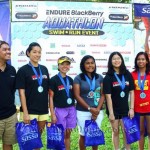 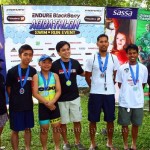 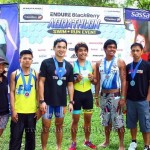 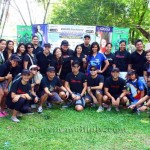 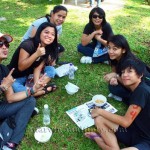