Most triathletes aspire to do the Ironman distance at least once in their lifetime. For Endure Multisport charter member Melvin Pangan and 64 others, that time has come. On Dec 3, 2011 on the waters of Anda beach and the scenic roads of Bohol, Melvin and company will live their dreams.

What a journey it has been for Melvin. My first encounter with Melvin happened during the first UP Law Dean’s Cup Triathlon in 2009. He was introduced to me by new multisport friend Ian. Both of them struck me as easy going, humble chaps, and we would see each other in succeeding races. That is one good thing about multisports: it may be an individual sport, but you certainly meet good people along the way.

Melvin went on to do the half-iron distance in the 2009 White Rock Triathlon. Back then, Melvin was already a strong runner, an average swimmer, and a newbie rider. Melvin survived the swim, and was close to finishing his dreaded bike leg when he met bike trouble. He ended up carrying his bike back to transition.

In 2010 Melvin tried the Bataan Death March Ultramarathon. He was doing ok, looking strong and assisted by a loving pregnant wife and driver, when things suddenly went awry at around km70. Melvin vowed to return and complete BDM. In the meantime, he when on triathlon mode as he prepared for his first SuBIT and Ironman 70.3 experience.

It was during the preparation for SuBIT and 70.3 when Melvin helped form the team that would become Endure Multisport. On the hills of Subic and the flats of Mall of Asia, friendships and triathlon dreams were nurtured. Melvin debuted in SuBIT with a time of around 3hrs, and finished the 70.3 in roughly 6.5 hrs. Always, he would catch up on the run, his strongest suit.

In 2011 Melvin outdid himself in many aspects. He conquered BDM 102 and finished within top 20. He broke the 3hr and 6hr barrier in SuBIT and Camsur 70.3. In the same year he recorded a 21K personal best of 1:41 during the Mizuno Infinity Run.

In 2011, Melvin is a more confident biker too. With friends and teammates, he joined cycling races to get better at what he perceived as area for improvement.

His strong running base, dramatic improvement in cycling, and steady swim pace should augur well for a full-distance triathlon like Timex 226. Melvin is a much improved athlete, thanks to his dedication and perseverance. But he remains the unassuming guy, quiet but steadfast to his principles and ideals. We at Endure look up to Melvin both for his athleticism and character.

To Melvin, whom our Sh-Endures fondly call Raymund Bagatsing, more power to your showbiz career, and your new day job as banker. More importantly, may you go the full distance and blaze a trail for all of us. Godspeed! 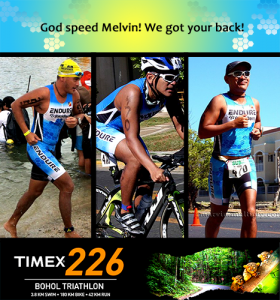