Challenge Philippines “Tough”. That was how they had branded it this year, and for good reason. Those of us who had done the inaugural edition were forewarned about the (longer than 1.9 kilometers) swim against a current, the grinding steep hills of Bataan, and the endless undulations of the run course through forest ranger training grounds. And yet there we were again, back for more.

I came out to the swim start around 6:20am. The pros were starting at 6:30am, while we women and relay teams would start at 7am in the final wave. This gave me enough time to be social with my athlete friends and wish them well, but not enough time to start feeling the pre-race nerves. 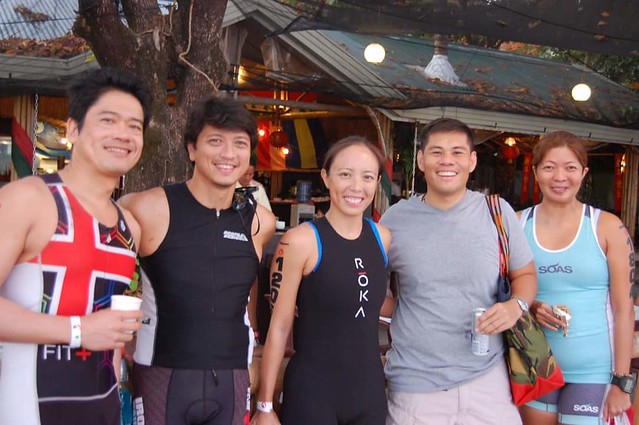 with FitPLUS (photo from Patrick Joson/TRI) 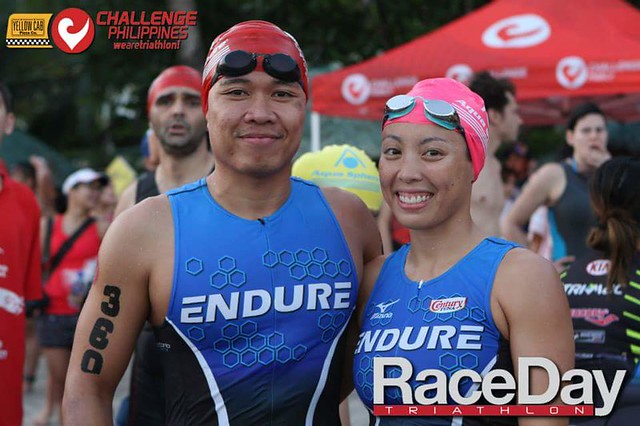 with Raffy Pamittan, the only other Endure member present (photo from RaceDay) 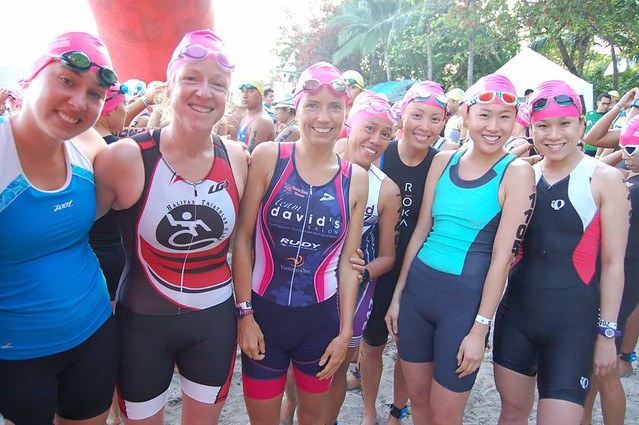 “We know you ladies can take the suffering better,” said Whit about our late gunstart (photo from Patrick Joson/TRI) 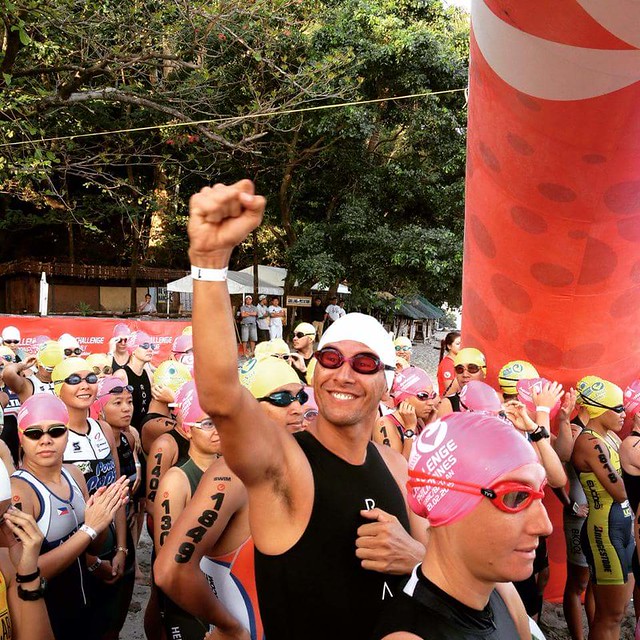 While there were nervous people around, the athletes around me toeing the starting line all had about a season or more of triathlon in them. This race had attracted those who were willing to step up to the next level and challenge themselves.

And then the gun went off. 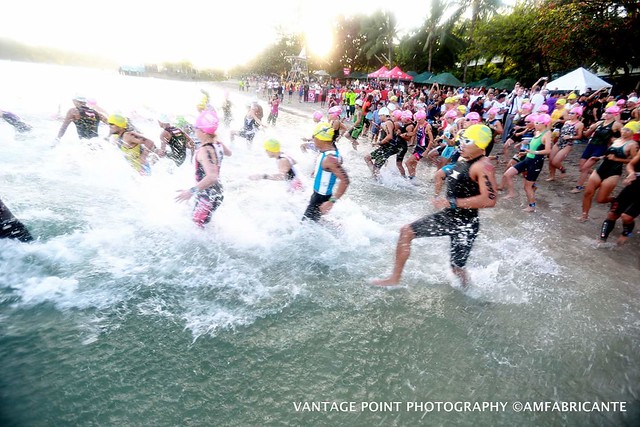 I dove into the cold waters of Ilanin Bay. It was a long way to the first turn buoy, about a kilometer, but I wanted to break free of the struggle happening around me. I surged ahead and fought for position.

The swim work I’d done started to pay off. Sure, the fast ones still got away, but I didn’t get stuck amid flailing arms and thrashing legs in the back. I felt pretty strong through that whole first stretch despite pushing against the current. The new Roka swimskin also contributed a lot to my feeling secure because of less drag (it covered my trisuit pockets) and its compression reminding me to get my legs up higher in the water.

(I also found myself chuckling inwardly as I saw a huge cluster of fast swimmers going off-course ahead of me while I was safely following the buoy line by my lonesome. What use is speed if you don’t sight for yourself, ey?)

The giant red turn buoys made sighting easy even in the morning glare, and it was so easy to find a rhythm I could sustain. The last 300 meters were a joy to swim because I could feel the current now working in our favor, pulling us in toward shore. I managed to shave six (!!!) minutes off my previous swim time on this course, which is actually about 2.1 instead of 1.9 kilometers long. 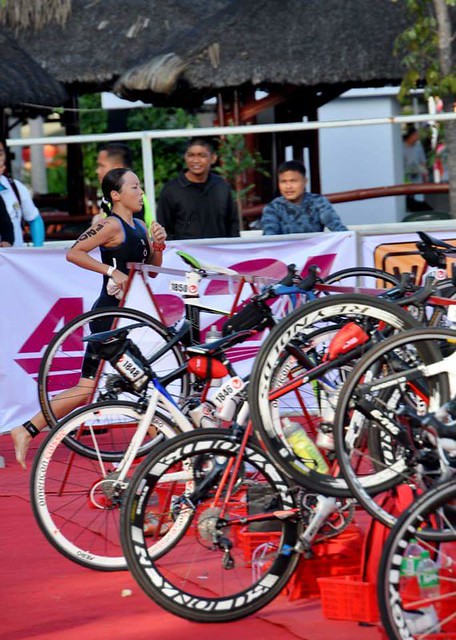 Into transition! (photo from Gibo Canlas) 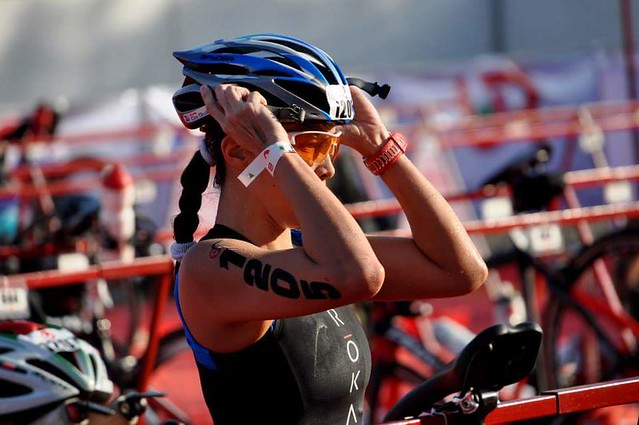 I took the first third of the ride fairly easily because I knew what lay ahead. The plan was to push only in the middle section on the small loop, so that I’d have enough left in me for the last two climbs back toward transition. 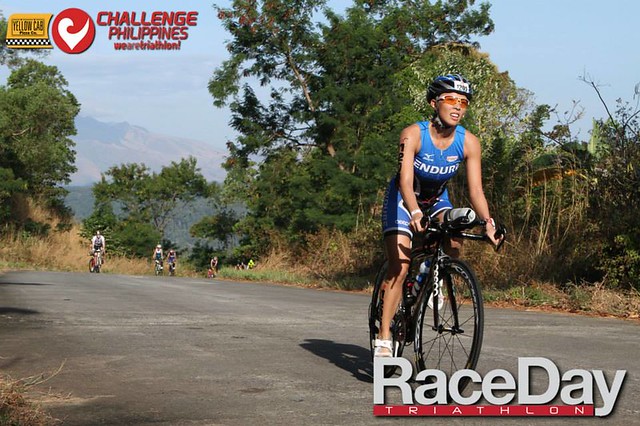 the longest hill (photo from RaceDay)

By the first climb I already felt the difference in temperature from the recon rides we had done previously. Summer had come early, and on a cloudless day like that the sun was going to be brutal! I took extra care to go through the aid stations to get what I needed, and I was hydrated enough to need a pee stop before heading back up the hills. The funny thing is, when I came out of the portalet, the Chief of Police who was manning the station asked for a photo with me! I obliged (I wonder which celebrity they thought I was?!) and then hopped back on my bike. 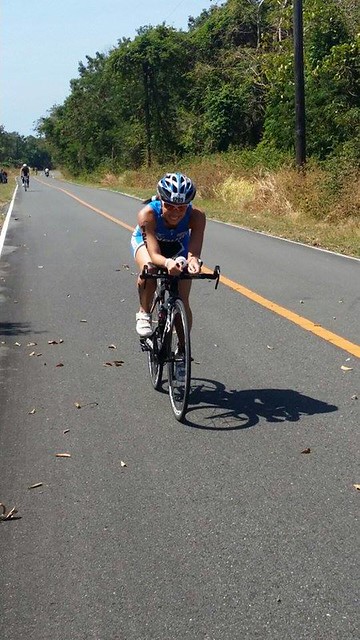 There was no shade on the penultimate hill, so stopping at the aid station at the top was heavenly. The Primo guys were all there with ice-cold bottles of water and Pocari Sweat, and they slid a giant block of ice down the back of my sport top before I set off for the last 9 kilometers.

I thought I had finally beaten the course because I hadn’t pushed too hard on the outbound ride and still had a lot left for the last climb. However, I had miscalculated my salt capsule intake, so my thighs started to give me warning twinges right before the hill. (Thank you, thighs, for cramping BEFORE the hill.) I got off my bike on the same flat turnoff I had stopped at last year, took two salt capsules, and pulled the chunk of ice out of my shirt so I could put it on my cramping quads. This eased the pain enough so that I could get back on my bike and finish the ride. I was still cramping, but at least my thighs weren’t locking up anymore.

And that’s the state I was in when I got into transition. Off came the helmet, on went the shoes (I had decided to go with the Mizuno Wave Hitogami), and out I went toward the forest.

That must have been the single worst showing I have ever had in a half-marathon. Early on, I already felt the desperation that had haunted me halfway through my marathon leg at Challenge Roth. You’re never going to make it, a voice in my head taunted, but I knew how to shut it up. I had toughed out that marathon — this was only half the distance!

If you can keep your head… If you can meet with Triumph and Disaster and treat those two impostors just the same… The words of “If” came to mind, and it just reminded me to calm down. To every problem, there is a solution. My bum stomach wasn’t accepting the food and gels I had prepared. So, drink cola and water! I was overheated and my heart rate was way up. So, grab some ice and walk! I sorely missed the sponges that had been such a boon last year, and regretted wearing a visor when I could have worn the trucker hat given out at registration so I could store ice atop my head. I gritted my teeth and hung on. I couldn’t feel any worse than that, could I?

After the first half of the run, I felt much better and started moving up the field. I ran with a swim squad friend for a while, but when I felt a surge of energy (must have been my fifth wind) I knew I had to go for it. This was my race and I was going to finish it strong on my terms.

I crossed the finish line in 7 hours — six minutes faster than I had done last year. I was faster in the swim, faster on the bike, but that run was just excruciating. What comforted me is that nobody overtook me on that last half, so everybody else was feeling just as bad!

All’s well that ends well though. I had a new course PR, and then someone informed me that I had come in second in my age group! 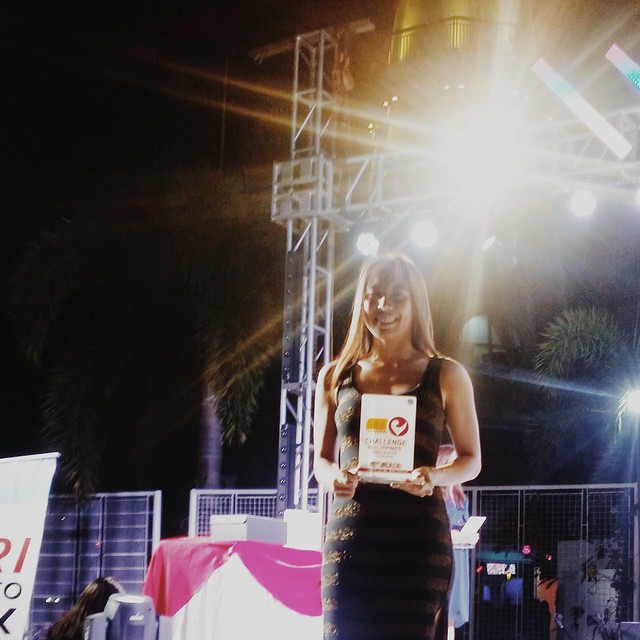 I decided to wear a dress to the awarding. 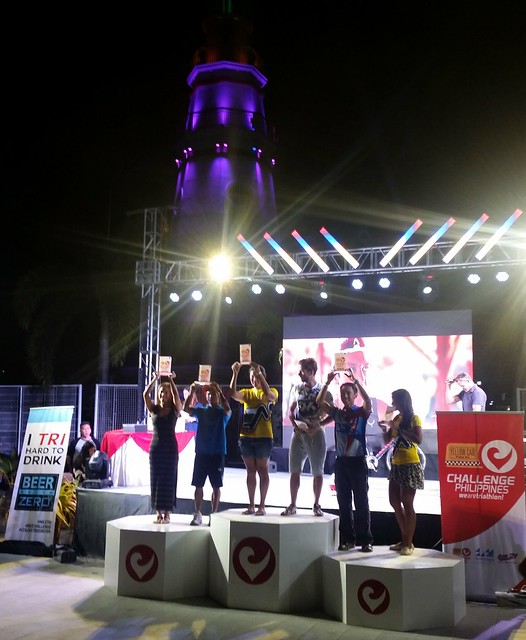 I was the only one who did. 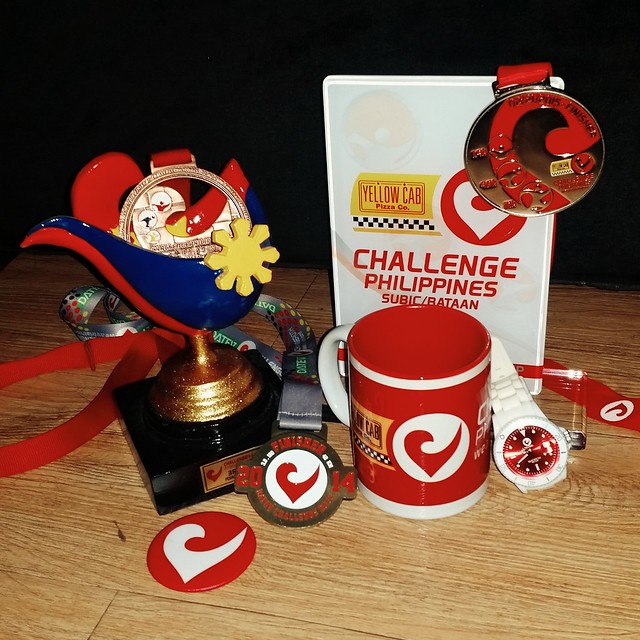 Welcome to my Challenge Family of knicknacks!

The Macca-SAF relay came in second to the Camsur Tri Team all-men’s relay. The pro men were dominated by Domenico Passuello, while Emma Pooley as predicted proved too strong for the other women. As expected, Monica Torres and August Benedicto defended their Southeast Asian elite titles. A number of my friends wrought their revenge on the course this year, recording massive PR’s or finishing where they had DNF’ed last year.

I told myself as I crossed the finish line, “Remember how awful that run was so you don’t sign up again for next year!”

I’m glad I did Challenge Philippines again, though. It tells me that last year was not just a fluke, and that I can suffer with the best of them. The question, “Are you tough enough?” was asked of all of us on that day, and those of us who finished answered this with a resounding “Yes!”

This is the kind of race you sign up for if you want to prove something to yourself, and I guess we all did. But maybe next year I can do the veteran thing like Macca did and just sign up for the relay. 😉

Thank you to my team Endure Multisport for supporting Raffy and myself in spirit even if you couldn’t be there. Thanks to our team sponsors Spyder and Mizuno for the great gear I rode and ran in. Also thank you to Ceepo for my wonderful Katana which sliced effortlessly over that course and through the headwinds. Thanks also to Century Tuna, Salice, and yurbuds.

Many thanks to the Challenge Philippines organizing team for putting on a great race — really one of the best races I’ve done. You have managed to capture the grandeur of an international race, the spirit of volunteerism and event ownership among the locals, and the attention to the athlete that are the hallmarks of a Challenge Family event.