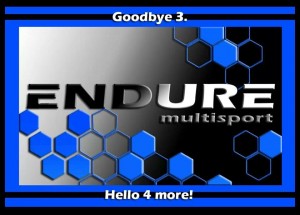 On March 27, 2014, Endure Multisport officially turns 4 years old.  When team founders Rico Villanueva and Joel Ramos finally agreed to formalize into a team their growing community of aspiring triathletes, they were very keen on one thing:  knowing who we are as a team, and what we represent and aspire for. The team will be a collaboration of the fast and the slow, of natural athletes who pour everything out on every single race and ordinary Joes who are in for the fit lifestyle and self-actualization through sports.  Joel is the natural sprinter, preferring the fast and furious distances over the long and slow. Rico on the other hand is classic marathoner, slower but steady.

The recurring themes of team collaboration, pushing athletic limits and pursuit of fitness permeate Endure’s 2014 triathlon season. In February, Challenge Philippines half-distance triathlon became a platform for Noelle de Guzman to showcase her significant improvements in the three disciplines. A Challenge Philippines ambassador, Noelle conquered the soon-to-be legendary seven hills of Bataan and finished third in her age group. It was also an athletic Challenge for daddy BongZ, who escapes the cozy home every Sunday to be strong enough to do the Challenge relay. For other members of the team, it was a Challenge to claim back their fitness. The race spurred kenkoyrunner Timmy Sebastian to run more and shed pounds, and for RJ Bumanglag to relieve some of banking pressures in the swimming pool. It was also a pursuit of fitness for solo Challengers Rico Villanueva and Hanna Sanchez. Rico used the big Challenge to lose 25 lbs and overcome his fear of bike downhills.  In true Endure fashion, Hanna provided jovial company to Rico in many bike course recons, and selflessly slowed down to pace a triathlete friend from another team in the arduous run. 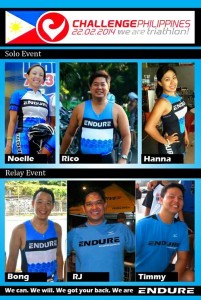 March which is Endure’s anniversary month began with four teammates participating in Tri Manila. Strongman John Doctor moved water and hammered it on the bike, and probably landed in the Top 5 or Top 10 of his large age group. Newbie Kira Ang reaped the benefits of her swim training with LC Langit, and happily biked in normally trafficked Roxas Boulevard.

For someone who has been biking just for a couple of months, that’s some achievement.  Rico Villanueva used the Tri Man to have a fun break after Challenge Philippines. For Gerard Cinco, Tri Man was an appetizer for the Ateneo Aquathlon the next day.  Multisport addicts that they are, all four Endure members did the weekend back-to-back treat of Tri Man – Ateneo Aquathlon. Endure loves the Ateneo Aquathlon race because the team bonded in swim training sessions for this race in its formative years. The 2014 race edition was a homecoming of sorts as now Cagayan de Oro-based Joel Ramos was in town to join the race.

The race venue was teeming in Endure blue as twelve aquathletes from Endure joined. It was a fun and happy race, with Challenge-recovering Noelle still managing first place,  triathlete-on-vacation Joel snagging second place, and Kira third place in their respective age groups. John was fourth in a strong field, while Gerard proved that CrossFit works by placing fourth behind the usual podium winners. The rest of the team all met their overall race objectives. Endure is excited to race Tri United 1 this weekend in Subic. It also has new Aspirants in this multisport adventure. It’s been a  good month, great year so far. May the lucky streak last and endure.