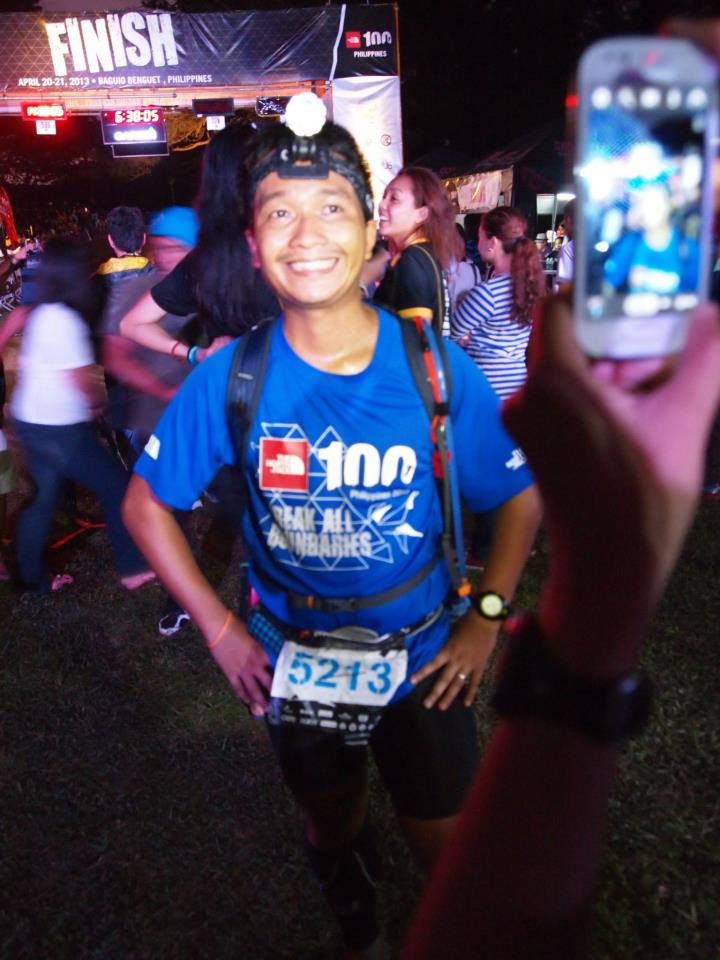 Last December 2012, I finished my first road ultramarathon – Tagaytay 2 Nasugbu 50km run, together with Melvin Pangan. After that, I eagerly waited for my next ultramarathon.

This year, The North Face 100 ultra series opened up their registration. My wife Arzen and I signed up for it. Bold enough (madness as you call it), I filled up the registration form and joined the 50km category, while Arzen registered for 11km, since this will be her first official run race after giving birth.

As a mountaineer, climbing, hiking and running on rugged terrains were a familiar thing to us, so we kind of have a substantial confidence level in joining this race.

We joined Salomon X-Trail as our tune up race. She joined the 12km category while I joined the 24km event. The race came, and I told myself that it will be just an easy race for me, (face palm for thinking that!). The supposedly tune up race turned out to be one of the hardest trail run I had in my entire life. I came unprepared and finished the race beyond the cut off. That race hit me big time and made me realize that trail runs should not be taken so easily.

Thus my game plan for TNF started. With that incident in mind, I carefully planned my nutrition, the route, the gears I have to wear and bring.  I even studied the elevation profile. I made sure to download the image of the route and elevation profile and made it my laptop wallpaper to help me focus at the task at hand. I memorized the route by heart and mind, thought of each aid station, calculated the distances between each station, and elevation loss and gain of the course. I joined Meljohn Tezon (aka BoyPraning) during their trainings, running 33km of trails, uphill and downhill and even running under the scorching heat of the sun. After completing my training with them, that was the only time I regained my confidence in trail running.

Then race week came. Early morning of Thursday, Arzen, Xander and I, together with our entire family, went to Baguio. We were planning to do a day tour first on Friday before my event on Saturday. On Friday, after our day tour of Baguio, I went to Azalea Residences to attend the race briefing. The race director informed us that last year, only 33% of the participants finished the course.  That’s the main reason why they’re using the  same course this year – as redemption for others. After the briefing, I decided not to take the buffet dinner anymore and instead went to SM Baguio to do last minute shopping for some gears I needed. After that, I went back to our transient house to do a last minute check with my gears and food/nutrition. Arzen prepared for me boiled potato, hardboiled egg, and tortilla sandwich with corned beef – all were wrapped with aluminum foil. In addition to the food she prepared for me, I also had some raisins and jellies. For my hydration, I prepared a bottle of Gatorade, bladder of water (2L) and a bottle of coke. I took a bath and headed for a sweet sleep beside my son.

And then the judgment day came. I woke up as early as 2am, and suited up my battle gears. I woke up Arzen and had my top secret breakfast. Around 3am we took a cab and headed up to Camp John Hay. As we arrived in the starting line, we saw the 100km runners already starting their madness as they were released at 3am. I lined up for the last minute gear inspection and prepared for it. At exactly 4am we were released to start our perils.

The first 9 kilometers was relatively flat and a bit of downhill. Runners ended up in Loakan airport where our first aid station (AS10) was located. I checked my watch and it was already 6:22am, around 1hr and 43minutes from gun start. The aid station had pandesal, 100plus and of course, water! I took a pandesal, refilled my water bottles and drank 100plus. Before I left the aid station, I turned on my secret weapon – my mp3 and speaker! (Cue in Eye of the Tiger!)

The next 5.8kms was a steep downhill. There were parts of the trail where you get a scenic view of Kennon Road. We reached a part of the mountain where the locals cultivate the sides of the mountain and made it as vegetable farm. After that part, we ended up in the residential area of Camp 6, Benguet. We found our way through the residential streets (thank God for those TNF flags that helped us navigate our way) and took a foot bridge that led us to an elementary school. A few meters away we saw the next aid station (AS9). I checked again my time and it was already 7:36am, 2hrs and 57minutes from the gun start. I took from the backpack my homemade corned beef tortilla and one boiled potato, I ate it and stayed in the aid station for around 7 minutes. Before leaving the station, I filled up my bladder and water bottles, because I knew after this aid station, another  grueling 9kms of uphill was next.

After AS9, we were welcomed by the hanging bridge that helped us cross to the other side of the mountain. We went for a few meters of uphills before ending up on a trail beside a cliff.

After that part of the route, the ascending portion of the route started. The climb was really f$%ck!87 hard. This was one of the hardest climbs of my life, or even my second life. For some parts of it, we did it 4×4 style (using not just our feet but also our hands just to climb). It took me almost 4 hours from the last station until I reached the top. Four effin’ hours just to cover 9kms! Imagine that!

The top at last! I reached the radar station of Mt. Cabuyao and went to the aid station (AS8), with 21.76km on my gps and 6hrs and 23mins from gunstart. It was almost 11am, my bladder and water bottles were both almost empty. Thank God for this aid station! At the aid station was a buffet party! It was a feast for all the hungry souls. It offered us different foods – cup noodles, chicken soup, rice, bananas, beef and potatoes, hotdog, hardboiled egg, coffee, ice cold water and more.

Before I headed up to Mt Sto. Tomas, where the next aid station and u-turn point was located, I decided to fill up my tummy. I got rice, beef and potato, hotdog, Chuckie, and a hot cup of coffee. After I finished my lunch, I went up again to reach Sto Tomas and the u-turn point. I told myself that in order to reach my cut off of 14 hours, I had to get back at AS8 after u-turn point at exactly 1pm. Again feeling energized, I ran going up to Mt. Sto. Tomas. There were portions that were concrete and there were parts that were not yet done. It was a wide road but the sharp-edged rocks made it difficult to run through. Finally, I reached the u-turn point for 50km category at 7hours and 37minutes, at around 12:20pm.

Before I headed up to Mt Sto. Tomas, where the next aid station and u-turn point was located, I decided to fill up my tummy. I got rice, beef and potato, hotdog, Chuckie, and a hot cup of coffee. After I finished my lunch, I went up again to reach Sto Tomas and the u-turn point. I told myself that in order to reach my cut off of 14 hours, I had to get back at AS8 after u-turn point at exactly 1pm. Again feeling energized, I ran going up to Mt. Sto. Tomas. There were portions that were concrete and there were parts that were not yet done. It was a wide road but the sharp-edged rocks made it difficult to run through. Finally, I reached the u-turn point for 50km category at 7hours and 37minutes, at around 12:20pm.

Finally it’s downhill time! I checked my watch; I only had 40mins to get back at AS8. Since it was downhill, I ran and was able pass other runners. I got back to AS8, approximately  31.8kms, or  8hours and 33minutes from gun start, around past 1pm. It was behind my personal cut off. I told myself that I will leave this station around 1:30pm. Again, I grabbed a cup of noodles and cup of hot coffee. I texted Arzen and informed her that I might be able to finish it around 8pm.

This time around, I recalculated my target time to reach AS9/Camp 6, Kennon Road to be around 3pm. Since it was a steep downhill, I was able to put in extra speed going down. I felt that my shoes were really doing well on rocks. It did not slip on rocks and gave me a descending advantage. Going down, I was able to pass runners who decided to walk down the trail.

I reached AS9 (Camp 6, Kennon) at around 3pm, had my refill and ate my trail food. There was a “sari-sari” store beside the aid station so I bought two bottles of coke. Feeling good that I was able to reach my goal time for this station, I was able to put more speed and gave myself an earlier target finish time at 7pm.

I left aid station 9 and proceeded to next station at Loakan. It was another steep uphill, and again, I passed through the residential area and then the vegetable farm on the side of the mountain. I reached at AS10 at around 5:30pm, 6kms to go to the finish line. I texted Arzen, and told her that I might finished it around 7pm since most of the last part is paved roads with trails. We entered trails of Camp John Hay, just like the first part of the race. During the last 6kms, I was joined by a Singaporean guy (forgot his name). And then it was last 200meters before to the finish line, I sprinted my way and able to pass by the Singaporean guy.

Hooray! I finished my first ultra race in 14hours and 35minutes, though 35minutes behind my personal cut off, but still happy to finish it before 18hours (race cut off) and conquered one of the hardest trail race in the land. I was so happy to see my wife again and headed to our transient house, was also really excited to see Xander.