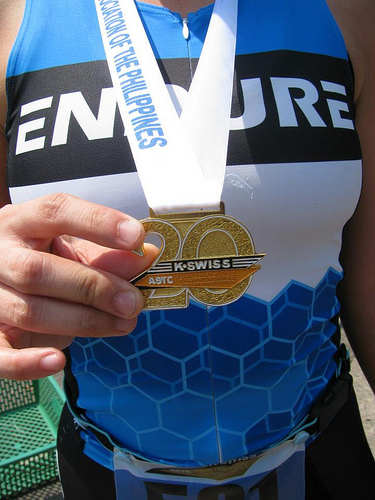 by Noelle de Guzman (repost from her personal blog http://kikayrunner.com)

While there was a lot of fast-paced action on Day 1 of the Asian Triathlon Championships (double-billed as the Subic Bay International Triathlon), most of the people in Subic were age groupers there for Day 2, when they would compete. For my second standard distance, I definitely felt like I crammed my training just a bit. Would I beat my previous time? There was only one way to find out.

Unlike last year when I rode up to Dungaree Beach to set up my T1, I had a ride from my parents who were there to support me in lieu of my ENDURE teammates (who were still there in spirit!). This meant that I had plenty of time to fuss over the contents of my T1 box, head to the bathroom, and do a warm-up swim. The water was warm and comforting, which did a lot to ease my pre-race jitters.

And then my heart rate shot up again when the all-women standard wave was suddenly released with very little prelude or fanfare. I hurriedly fitted my goggles over my eyes and started swimming.

One of my goals for this race was to complete the swim without resorting to too much backstroke; I’ve been working hard on my freestyle and I knew it would be the faster stroke. However, after a few minutes of getting jostled, I flipped over and did about 200 meters of backstroke waiting for the mass of swimmers to dissipate. Then I started doing the freestyle again and before I knew it I hit one of the turnaround buoys!

I found my freestyle and my rhythm on the second loop (and finally set eyes on Dungaree’s infamous abyss). I somehow inadvertently kept slipping into a space in front of one swimmer who probably didn’t like getting overtaken (I felt hands grab my ankles a few times), but we were probably matched in speed because I couldn’t pull away anyway. I need to work on sighting because I kept veering left on the way back, which lengthened my swim time by more than a few minutes.

Coming out of the water, I felt noticeably fresher than I did last year, which meant that long bike ride up the hilly Corregidor Road wasn’t an ordeal trying to get my breath back. The previous week’s bike recon was definitely a huge help because I was forewarned about where to attack and where just to keep the wheels spinning.

I was still undertrained and knew it; I could feel the first twinges of cramps coming over my hamstrings after the U-turn past Bunker Bob’s. I spun through the cramps on a lighter gear and enjoyed the downhills.

On the flat portion of the bike course, one girl on a tri bike kept overtaking me. I overtook her once, but figured it would waste too much leg power trying to keep the lead. Instead, I kept her in sight (no drafting, of course) and figured I’d just eat up her lead once we got on the run course.

The smaller 10-kilometer loop came and went by pretty quickly; I was just thankful I had kept upright on all the U-turns, which aren’t my favorite thing at all.

Because of the speed we were going on our bikes, we didn’t feel the heat. But that changed when we started the run. By then the sun was merciless, and the course was mostly unshaded. Despite pouring water over my head at every aid station, by the end of the first loop I had to pull up my tri top to let some heat out.

Again, the cramps crept up my legs just like they did last year. But this time, I was prepared for them and knew the only way to keep them at bay was to keep running. So I flew through my three loops; it really helped that the cheering crowd was sizeable at the time, and populated with friends! Just before the last stretch, I smoothed my hair back, pulled my tri top down, and set off on a finish sprint.

Because the swim start was so abrupt, I hadn’t been able to start my stopwatch or even check what time our gunstart had been. So when I crossed the finish line, I knew I felt good but didn’t know whether I had beaten my previous year’s time of 3 hours and 19 minutes.

Suddenly I was being draped with a finisher medal. Wait, SuBIT never had finisher medals before! This was a nice touch since it was the 20th anniversary of SuBIT — and because other triathlons in the country now give out finisher medals. Hey, it beats getting a souvenir towel every year!

After jumping into the ice bath and getting my photo taken at the finish booth, I found Raymond and Sid (from my Thursday group runs) who had both posted monstrous sub-3 hour times.

The celebratory mood continued when I came across my runner friends Bave and Cris. They were there as part of a huge group of relay participants instigated by Running Host Boy Ramos, who taught many of them how to swim. I challenged them to do the whole thing by next year. 🙂

As is my habit, I showered and changed just in time to attend the post-race brunch and awarding ceremony at Travellers Hotel, which was home base for the triathlon. I missed my teammates the most during this part because I was the only one in our post-race Mizuno shirt. I felt slightly out of place and took a seat at an empty table. Thankfully, Chang of XTRM Tri popped in to collect her first place age group prize, so I had someone to sit and chat with.

As the winners of my new age group (30-34, ugh!) were called, I knew I wasn’t going to step onto the podium. While in previous years the organizers awarded up to fifth place, this year they were only awarding up to third place. (Last year, I was in fifth place in my age group.) A little while later, president of TRAP Tom Carrasco leaned over to our table and said, “Fourth place ka. Sayang!”

But wait! Awarding wasn’t over yet. The marketing people from Century Tuna have customarily given out awards for Best Triathlon Superbod at SuBIT. Usually this ends up in the male winners taking their shirts off, haha. I readied my camera.

And then I was called to the stage.

I knew I had shed a lot of fat since last year and built up some muscle, but (2nd place) Superbod? Wow! What positive reinforcement. And yes, P7,500 is a great motivator. 🙂

After a full weekend of covering Day 1 (live Twitter feed) and participating in Day 2, I felt really positive and upbeat about my SuBIT/ASTC Asian Triathlon Championships experience. After I saw my splits, I improved in all three legs! So how was your race?