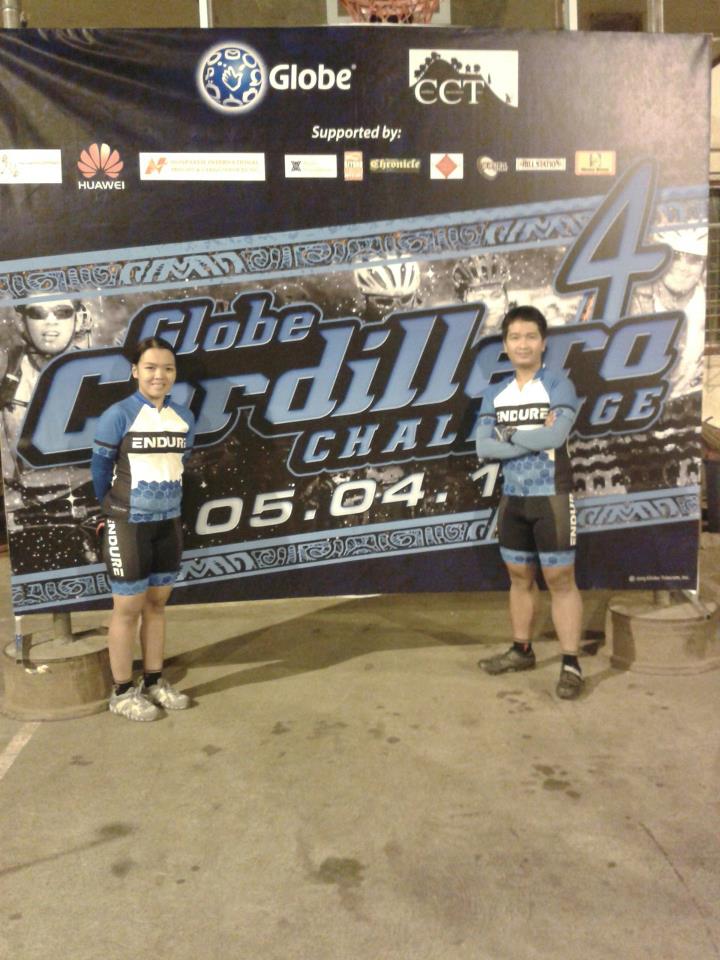 The first time we learned about the 4th Globe Cordillera Challenge (GCC4), my husband and I really got excited. Personally, Baguiois a place close to our hearts. I can still remember in 2011, before Pyds and I tied the knot we biked from Tarlac to Baguiovia Kennon Road. It was a heaven and hell experience for me. But after giving birth to our first son, I think it’s about time that I add another feat on my list – the epic Ambuklao ride by GCC4! But this was an extreme challenge given that this was my come-back ride. Should I accept the challenge?

The first day Globe opened up its registration, we signed up. To be able to register or secure a slot, the participant must donate P1,000 which then will be used by Globe as funds to plant trees in the Cordillera mountain range. One cool thing with the said event was that the cycling jersey was made of recycled PET bottle. On top of that, the fee also included the bike transportation from Manilato Baguio and vice versa. Knowing that the GCC4 will be on Ambuklao, I felt scared with the downhill part of the route – it’s 18km of downhill trail!

A day before the event, we went to Riverbanks to meet our friend who was also a participant. We went to Baguio as a group, and planned to stay overnight with another friend. The night before, we prepared our gears needed for tomorrow’s ride.

We were up as early as 2am, suited up and had breakfast. We got our bikes and moved it up to our friend’s vehicle. By around 3am, we left Baguio City en route to our destination, Tublay Municipal Hall.

We arrived at the town hall around 430am. We went to the check-in area to get our jersey and bib number. After that, we did some last minute bike check and placed the bib onto our bikes. The program started with a prayer and then the starting horn sounded. It was already 6am when we were released. The first part of the ride was uphill. The uphill portion provided us with the bike ride’s warm up, like the uphill portion of Antipolo when you take Sumulong Highway. The weather was good, the sun shone brightly but the high altitude made the temperature cold. One of the main challenges in this section of the ride was climbing the uphill part, and after recovering from that, there were parts where you can smell chicken dung. Yes, chicken dung! They sell it as a fertilizer.

After riding around 8kms, come the downhill part of the trail. I consider the downhill trail as my weakest discipline in mountain biking. The good thing with an 18km downhill trail, you need less effort pedaling and just “glide through the air”. There were sections of the trail where one must really need to be careful, some sections had tight corners and were too technical that one wrong handling will result to falling hundreds of feet below. Since this was just a ride and not a race, Pyds and I decided to slow down on some dangerous parts of the trail. We also took some pictures of the trail and just made the race/ride picture-pace.

The Baguio-Nueva Vizcaya Roadis a paved road and starts on a rolling terrain. We had around another 3km-climb when saw other bikers who take a Halo-Halo break. We also stopped and bought halo-halo to fill up our tummy. After our halo-halo break, we got on our bikes and started to move on. Some sections of the remainder of the route were rolling; one moment you are climbing up, and another moment you descend. Things would have been different if this part of the route was not on paved roads. Along the route we also saw Pinkanjo, an eatery is famous to hikers who go up to Mt.Pulag. The remaining downhill brought us to Adunot Bridge.

After all the ups and downs we’ve initially encountered, I thought that it was done. I was wrong! The Adunot bridge was just the starting point of the most grueling point of the route – a 20km-continuous uphill segment similar to theTeresa Roadin Antipolo, while some sections were similar to the ever-famous Shotgun near Timberland. Add on to this was the fact that the sun was beginning to bear down on us. At that time, we were climbing up around 12noon from the lowest part of the route. Pyds told me to just take it easy and use granny to some point here I can rest a bit and take some time off to recover. Upon seeing a store, we decided to stop and bought some cold drinks. Refreshed, re-hydrated and re-energized, we started to climb again. We climbed, we climbed and we climbed like there’s no more tomorrow. Pyds always told me to use granny on some part but sometimes, he gets a bit annoying! We pushed harder until we reached Binga view deck. Then it started to rain. We stopped for a while to put on cover for our backpack and then moved on. After Binga, the roads were again downhill, thankfully still on paved roads. Weird weather as it was, the rain stopped and then it was sunny again. Thank God it’s downhill, or so I thought. After another set of 5km-downhill route, I thought that was it. BUT NO! Another set of uphill awaits us. We ENDUREd the heat of the sun, together with the long climbs. Pyds kept on reminding me that we must push harder to be able to reach the cut-off time. From time to time, he computed our expected time of arrival. With our speed of 5-6kph, I said to myself that it will be hard for us to end within the cut-off period. We did not want to be swept by the SAG, we already exerted too much effort just be swept away. I said to myself – “no way!” Instead of stopping to recover, we decided to just walk with our bikes and pedal again if we feel our energy is back.

We finally (FINALLY!) reached the end of our perils as we turned right (or so we thoughtagain). The marshal then shouted that it will be another 500meters uphill and then the remainder will be downhill, a technical downhill! As we were processing all these, it started to rain, hard. It was so hard that we decided to stop by a sari-sari store. I knew Pyds was getting frustrated and disappointed by the situation. He really hates it when it rains. He prefers to be under the heat of the sun rather than singing its raining men. Fortunately, the rain stopped and we were able to move on. The downhill part was really technical. The road was under construction, and peanut butter-like mud warmly welcomed us. We were surprised with this part of the route, especially some peanut-butter mud portion of the downhill. There were additional sections of the trail that I had to walk with my bike; as these were happening, I can hear Pyds murmuring words. I know my walking with the bike really gets into his nerves. Water from the mountain flowed to the trails, making it more dangerous. While all these were happening, out of the blue, I saw a concrete road. Yahoo! We reached a gas station and then we took another right turn, which led up toHalsema Highway. Finally! A familiar landmark. “Push!” – The only word I can hear from Pyds. And yes, without even looking at his face, I knew his game face was on. Knowing him, if he is in this mode, he will hit everything on his path. A final stretch of the climb is on our way (Akala ko ba downhill nalang?), I can hear Pyds telling me “Bawal maglakad!” With all the remaining energy I had, I pushed hard, the hardest push I can give that time. And then the finish line!

We arrived around 4pm and a feast welcomed us. Their plates were made of banana tree/ trunk. They served menudo, nilagang baboy, adobong baboy and fresh garden salad.

Challenge accepted and we survived it. The taste of my comeback ride – wooping 66kms of cross country.